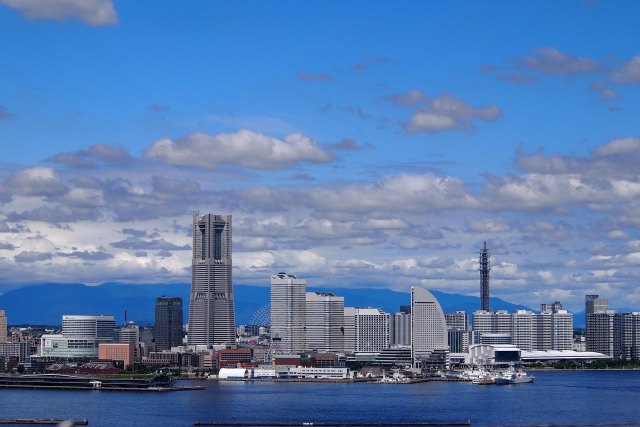 Yokohama used to be a small fishing village in Edo Period until the middle of 19th century, but was received much attention when American Black Ship arrived in Japan off Yokohama in 1953. Japan had closed the country (National Isolation Policy for more than 200 years), but opened the country since then.

Samurai Worriers era ended and Japanese modernization started from Yokohama. After experienced several disasters, e.g., Great Kanto Earthquake in 1923 and Air Raid during World War II in 1945, Yokohama arose arose became one of the most beloved cities in Japan.

All tours are basically walking tours except for Sankeien Garden. These are examples. Tour plan can be arranged according to your request.

The first small wharf was constructed in 1859 when the Yokohama Port was opened as the Pacific Ocean gateway for Japan.  After several reconstructions, the current terminal was completed in 2001, the year of FIFA Football World Cup first held in Japan, designed by the team of English architects.  It is the unique barrier-free structure with gentle sloping wood-deck floors without pillars and beams.  From the roof-top space, opening for 24 hours, you can enjoy a 360-degree panoramic view around the port.

The first water front park in Japan opened in 1930 and is loved not only by Yokohama citizens but also by all Japanese people as a symbol of restorations; the coastal area was reclaimed with debris of the destroyed buildings by the Great Kanto Earthquake (1923).  There are many eye-catching monuments in the park including a statue of “A Girl with Red Shoes on”, with a sad true story behind it.

Hikawamaru, a Japanese first luxury liner, set out on her maiden voyage in 1930 from Yokohama to Seattle and Vancouver as a cargo-passenger boat in the Pacific Ocean.  It was a beginning of shipbuilding age in Japan.  Until her (Hikawamaru) withdrawal from service in 1960, she carried 25,000 passengers in 238 trans-Pacific voyages.  During World War II, she was converted into a hospital ship and brought back injured soldiers and civilians from overseas.  She hit mines three times but survived.  She is called lucky ship and may give you a good luck if you visit her.  She was designated as a National Important Cultural Property in 2016.

Chinese people first came to Yokohama as interpreters for foreign trade between Japanese and Westerners when the Yokohama Port opened in 1859.  It became the residence of Chinese traders who settled down in the city.  Today, there are more than 600 shops and about 240 restaurants, and it made Yokohama Chinatown one of the biggest Chinatown in the world.  The town is protected from evil spirits and bad lucks by ten colorful gates based on feng shui principles.

This is the oldest western style shopping street in Japan. Motomachi located in between foreign trade district and the foreign settlements for westerners living in hillside Yamate area.  Japanese people who lived in Motomachi started to do business with westerners; bakeries, furniture stores, boutiques, general shops which dealt with goods that westerners needed.  They expanded customer target to Japanese young generations, and created a new brand-name called “Hamatora” or “Yokohama Traditional Style Fashion” in 1970s, which was modeled by Ivy league clothing popular during the late 1950s originated on college campuses in the Northeastern Unites States.

French troops and English troops used to station on the hill.  After they evacuated from the area in 1875, there constructed mansion houses designed by famous architects for foreign government officers and rich western businessmen.  The hilltop area was arranged and opened as Harbor View Park in 1962.  From the park, you can get the whole view of the harbor and a spectacular Bay Bridge, a gateway to Yokohama Port.  Roses are beautiful in the English garden in spring and autumn.

It was a Japanese temple ground.  An American marine of the Black Ship passed away in 1859 here in Yokohama.  American Government wanted to bury him on the hill from where he could view the sea which led to his mother country.  Japanese government offered this place for his cemetery as a sigh of friendship between the US and Japan.  Since then, about 5,000 foreigners, who contributed to the modernization of Japan from more than 45 countries, are laid to rest here.

Yamate area, which is called “Bluff” since it is on the hill, used to be a Foreign settlement for western businessmen who was successful in trade in the end of 19th century.  Several gorgeous mansions having historical importance are remained or restored.  There remains Christian Church from where missionaries and nuns preached Christianity in Yokohma.  Ferris University is originated from Japan’s first girl’s seminary founded in 1870 by Mary E. Kidder, an American missionary.  Yamate is an area with an exotic atmosphere loved by Yokohama citizens.

Landmark Tower opened in 1993 is an icon of Minato-Mirai 21 district and a symbol of new Yokohama.  It used to be the tallest building in Japan (296m), but now it is the second tallest building next to Abeno Harukas in Osaka (300m).  Images of traditional Japanese historic culture were designed on the tower; the image of a Torii Gate of Shinto shrine on the top part and the image of a castle wall on the lower part of the building.  The maximum velocity of the elevator is 750m/minute, and it takes you to the 69thobservatory deck for 40 second. On a fine day in winter season, you may view Mount Fuji from there.

Nippon-Maru was built in 1930 as a sail training ship for students of merchant-marine school by the Ministry of Education.  She (Nippon-Maru) is 2,278 gross ton having four masts and 35 sails with auxiliary engine. Until retired in 1984, she sailed the distance equivalent to 45.5 times around the globe and trained 11,500 captain-to-be.  She is a beauty and used to be called “Swan of the Pacific Ocean”.  In national holidays, she shows a demonstration of full sail setting by qualified volunteers.  She was opened to the public, and you can visit the inside of the ship.  On the other side of the ship, there is an Yokohama Port Museum in where you can learn Yokohama history of the past 160 years how Yokohama transformed during the modernization era.

This is a modern commercial complex including a variety of exciting shops and nice restaurants in a spacious and relaxing place.  The venue often hosts a variety of events, making it ideal for an entertaining experience for people of all ages.

Cosmoworld is an amusement park located in the Minato-Mirai 21 district. There are three zones according to age appropriateness; Wonder Amusement Zone, Burano Street Zone, and Kids Carnival Zone, and anyone can enjoy a variety of attractions in the park.  Cosmo Clock 21, a giant Ferris wheel, was the world’s tallest Ferris wheel (112.5m high) when it first opened.  You can enjoy the panoramic view through the ride in the sky.  Especially at night, it would be a perfect date spot for couples as the night illumination of the area is particularly beautiful.

Cup Noodle is one of the greatest inventions in 20th century.  Mr. Momofuku Ando, a founder of Nissin Food Group, invented “Instant Ramen-Noodle” for the first time in the world in 1958.  Everyone was poor and did not have enough food for living in Japan at that time, still under recovery stage from the war.  He wanted to serve easy food for everyone at a reasonable price.  After a ton of trial and error, he finally made it commercial.  He had a patent of instant ramen but opened his intellectual property and its know-hows to other competitors, and contributed to the spread of the instant ramen.  Momofuku was a creative man and invented Cup Noodle in 1966.  This museum introduces how Momofuku created Cup Noodle.  You can also enjoy making your original cup noodle by yourself.  This is popular not only among children but also among grownups.

Two three-storied warehouses were constructed in the beginning of 20th century to stock export goods together with the construction of freight train railway from Sakuragicho station.  They consisted of innovative facilities such as built-in cargo elevators, sprinklers and fire doors.  The warehouse mission came to an end in 1960s since the container shipping style has established.  In 2002, the historical area was redeveloped, and the warehouses were renovated as modern commercial complexes having shops, restaurants, and open spaces for various event.

Sankeien Garden is a rich beautiful Japanese landscape garden designed by Sankei Hara, one of the most successful businessmen in the end of 19th century.  He succeeded in silk business with European countries.  He loved arts and historic Japanese architectures.  He collected and reconstructed many Japanese historically important buildings from Kyoto and Kamakura and made it very unique private garden.  The garden was opened to the public in 1906.  You can enjoy viewing a variety of flowers all year round.  They are all Japanese original varieties.

We offer you the guiding rate as below;

※ Booking is preferable 2 weeks or more in advance.

Please fill in the below box and send your requirement.

Payment is able to be settled by credit card (Paypal).
After your booking, we will send you an invoice, then after your payment by credit card, the booking would be completed.

If you have any questions or offer to book, please send a email. We welcome even tiny questions! Don’t hesitate, and see you in Japan!!