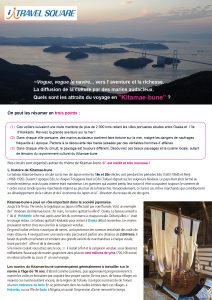 What is the charm of the “Kitamae-bune” tour?
There are the following three points.

This is an element that has rarely been seen in Japan’s inbound tours so far. 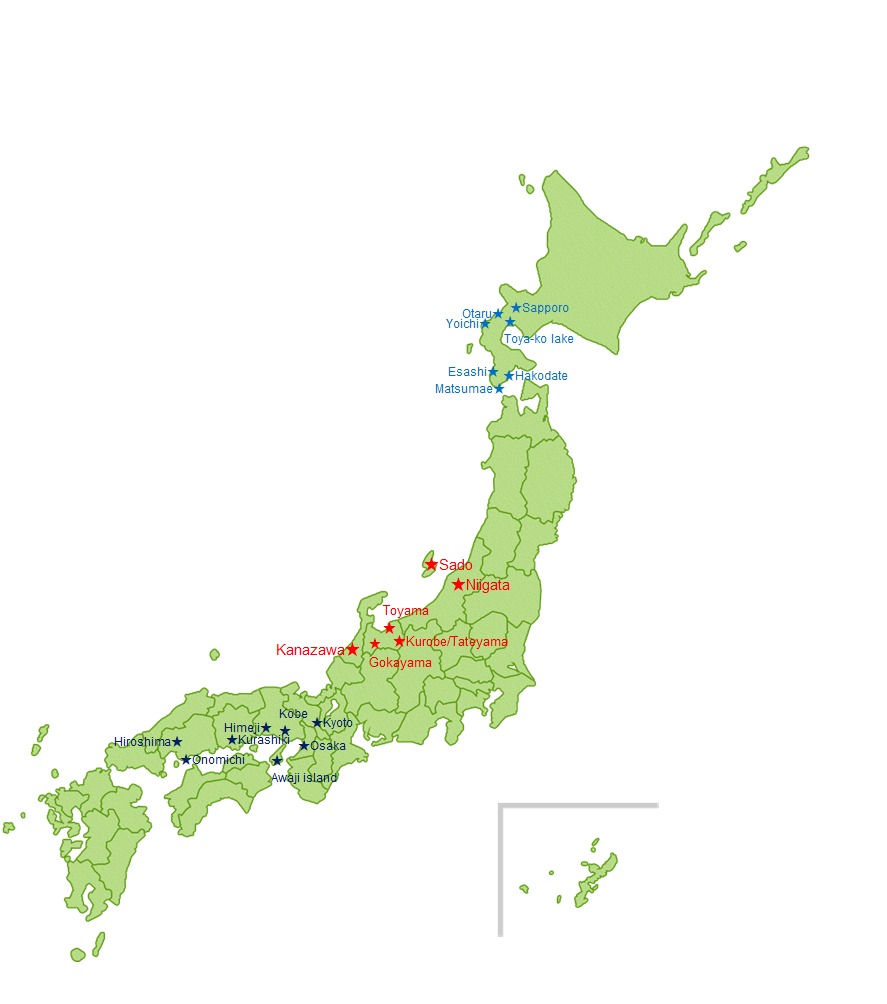 ① “The Kitchen of Japan” The road to Osaka; Western Japan

③ Treasures of the sea that created Japanese culture; Hokkaido

Kitamae-bune was especially active from the middle of the Edo period (1603-1868) to the middle of the Meiji period (1868-1920). During the Edo period, the “Shogun” (the general) established a base called the shogunate in Edo Castle (now the Imperial Palace) and ruled “Daimyo” (the feudal lord) all over the country. There were no domestic battles, and the country was almost closed to the outside world, so the meaning of the existence of the “Samurai”, which was to fight, was lost. But Samurai still had the highest social status, and merchants who dealt with money had the lowest social status. However, it was during the Edo period that those merchants were most active and enriched the culture, economy and lifestyle of Japan.

Kitamae-bune was a part of this movement.
Until the end of the 19th century, the distribution of goods in Japan was carried out by waterways. There are various theories about “Kitamae-bune”, but one theory is that it means “a ship heading north”. For example, in late March, the ship departs from Osaka, “the kitchen of the world”, and arrives in Hokkaido in late May while doing business at each port. They left Hokkaido in early July and arrived in Osaka in early November.
Kitamae-bune ships didn’t have paddles. This is because oars require rowers, which increases labor costs. Using only the sails to control the wind, the large wooden boats are loaded with a wide variety of cargo, sometimes traveling 2,000 kilometers before returning. Then, they purchased cheap goods at ports, sold them at high prices where they can be sold at high prices, and made a profit from the price difference between regions.
They were always in danger of a sea accident, if their ship sank they would go bankrupt, and if they sold their goods and returned safely, you would have a lot of money. It was literally a life-threatening adventure. There are many records of making more than 100 million yen in today’s money on a single voyage. Thanks to the Kitamae-bune, so many products has progressed in various places where the sales channels have expanded greatly.

Crew and Ports of call

In general, from the age of 16, they started working as a servant on a ship, first as a caterer, gradually learned how to handle sails, and then saved money to acquire a ship. From Tohoku to the Seto Inland Sea, there are still beautiful villages where those sailors lived. In Kaga in the Hokuriku region and Sado Island in Niigata, walking through the narrow alleys and houses of these villages will make you feel as if you have traveled back in time.

“Hokkaido” is the most important base for Kitamae-bune.
Japan’s northernmost island offers natural resources that cannot be found anywhere else in Japan, especially seafood such as herring, herring roe, salmon, salmon roe, and high-quality kelp. Some of the owners of the Kitamae-bune emigrated to Hokkaido, and some of them managed the fishing grounds, literally taking on everything from production to transportation and sales. Matsumae, Hakodate, Esashi in southern Hokkaido, and laterly Otaru prospered thanks to ship owners who became wealthy through successful business.

At the ports of call where they anchored their ships, there were “markets” and inns. Storage warehouses were lined up, restaurants and entertainment districts with “Geisha” were opened, delicious sake (Japanese liquor) and food were made, and it was crowded with many people. Stones, roof tiles, and even straw sold, and various cultures and techniques, such as cotton, ceramics, lacquerware, and textiles, spread throughout the region thanks to the Kitamae-bune, made enrich people’s lives.

In 2013, Japanese food was registered as an Intangible Cultural Heritage by UNESCO. “Dashi” is the base of Japanese cuisine, and “kombu” and bonito flakes are essential ingredients for soup stock. Good quality kombu from Hokkaido was transported in large quantities to Kyoto and Osaka in the Kansai region by Kitamae-bune. Due to the compatibility of Kansai water and ingredients, kombu dashi is the main ingredient in Kansai soup stock.
On the other hand, in the Kanto region, the basic soup stock was made from bonito flakes brought from Tosa in Shikoku. It was influenced by the fact that it was difficult to obtain high-quality kombu in the Kanto region, and that the water and ingredients of the Kanto region went well with bonito flakes.
In this way, Kitamae-bune is deeply involved in the establishment of Japanese cuisine, even for “dashi”. Vinegar and salt from from the Seto Inland Sea area were also transported, contributing to the development of Japanese cuisine.
Hokkaido’s kelp is distributed to China via Kagoshima, Okinawa, which was called “Kombu Road”. And other specialties such as Toyama prefectire’s “kobu-jime” (fish sandwiched between sheets of kelp), kelp-wrapped kamaboko, tororo kelp (kombu) rice balls, and Fukui prefecture’s oboro kelp, was created.

Herring was transported from Hokkaido to various parts of Japan as a preserved herring (dried herring).
For example, Kyoto’s herring soba noodle, Kanazawa’s daikon-zushi (pickled herring and daikon radish), the Aizu region’s herring pickled with sansho pepper, and Fukui and Aomori’s herring pickled in rice malt are some of the local specialties.
Herring fertilizer dramatically increase the production of cotton cultivated in Okayama prefecture and other temperate regions. The sails were originally mushiro made from woven straw, but they were replaced with tear-resistant cotton cloth, which made greatly improved sailing ability. Cotton spread to various regions, and the textile industry flourished, bringing dramatic innovations to Japanese clothing. Especially in Kurashiki, Okayama prefecture, which is visited by our tours, a famous company is active as the birthplace of Japanese jeans. In addition, canvas, which is particularly durable among cotton, has appeared, and due to its durability, it is now popular for backpacks and bags.
On the other hand, the herring pots, which needed to manufacture this herring fertilizer in Hokkaido, were mainly cast in Takaoka City, Toyama Prefecture.

In the Edo period, it was common for townspeople to untie and remake kimonos many times, so second-hand clothes from Kyoto sold at a high price in other regions. Much worn out kimonos were reborn as new cloth products by ripping the cloth and weaving it in place of threads, called “Saki-ori“. When you visit Sado Island on our tour, be sure to experience Saki-ori using a loom. In less than two hours, you can weave the luncheon mat which is only one in the world.

Straw was also sold in Hokkaido. Straw is a by-product of harvesting rice from the ears of rice. It was widely used in agricultural work, such as coats, hats, and shoes to protect against rain and snow, and was an indispensable item in daily life. In Hokkaido at that time, it was still cold and rice didn’t grow well, so there was a shortage of straw.

In order to stabilize the ship, stones quarried from the Seto Inland Sea were piled on the bottom of the ship as the ballast. Those stones were sold at a high price as stones for the gardens of feudal lords and wealthy merchants. In Japan, rock gardens and karesansui (dry landscape gardens), which represent mountains with stones and also represent ponds and water with sand, are popular.

As goods were transported by Kitamae-bune, communications of people took place in various places. Especially during the Edo period (1603-1868), when the movement of people was strictly restricted by the shogunate, ports of call became hubs of information. For example, Wajima lacquer ware in Ishikawa Prefecture took advantage of its location as a port of call to collect information from all over the country, procure materials, improve productivity and technology, and establish an installment sales system to gain name recognition that continues today. Some of Kitamae shipowners later turned to banking, marine insurance, and warehousing, still active in nowadays.
Sailors were also propagators of culture. Ushibuka Haiyabushi from Kumamoto, Kyushu handed down to Sado Okesa in Niigata prefecture and Tsugaru Aiyabushi in Aomori prefecture, and Komuro Bushi from Nagano prefecture handed down to Echigo Oiwake in Niigata and Esashi Oiwake in Hokkaido. Furthermore, festivals based on Kyoto’s Gion Festival spread to various places, such as the Noheji Gion Festival in Aomori prefecture.
In addition, several traditional culture has taken root, such as Ningyo Joruri in Awaji Island, Takigi Noh in Sado Island, also Kutani ware and lacquerware have been carried down in various places.

In this way, “Kitamae-bune” had a great influence on Japanese culture and tradition.
When visiting Japan, let’s look for the footprints of the Kitamae-bune!!

If you have any questions or offer to book, please send an email. We welcome even little questions! Don’t hesitate, and see you in Japan!!