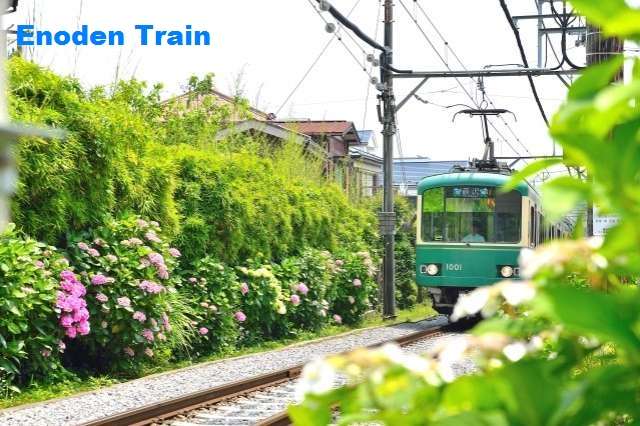 Kamakura is one of the most popular tourist site in Japan.  It is easy access from Tokyo; it takes 60 minutes by JR Yokosuka Line.

Kamakura is an ancient heartland of Samurai warriors; First Samurai Government started from Kamakura in the end of 12 century.  There are many tasteful temples and shrines.  Zen-Buddhism came from India through China and developed here in Kamakura.  And you can best enjoy seasonal flowers in each temples and shrines.

Kamakura is surrounded by wooded hills and there are varieties of hiking trails.  On the other side of the hill, it opens to the Pacific Ocean.  The beach is beautiful and you can see Mt. Fuji over the Ocean when the weather is clear in winter days.

All tours are basically walking tours, but we can take Enoden Train, bus or taxi as appropriate.  These are tour examples.  Tour plan can be arranged according to your request.

Kamakura is surrounded by wooded hill and faces to the ocean on the other side. It is a lot of fun to trace on trails where ancient Samurai warriors used to walk. You will see Daibutsu Kiritoshi, a Cutting Road, which used to be one of the seven entrances to the city of Kamakura. You will meet Great Buddha in the end of the trail. Before going into the trail, we will visit Tsurugaoka Hachimangu Shrine, the icon of the city, and Jufukuji Temple which has a beautiful stone-paved approach.

There are many places that give you power and energy. You will wash your money with holly water in Zeniarai-Benten Shrine to make it a fortune. Kuzuharaoka Shrine will give you a good luck in your romance. If you are thinking of getting rid of old love and trying to make a fresh start, I can take you to Tokeiji Temple (Temple for fresh start). You may make good in your business when you visit Sasuke Inari Shrine because the shrine is said to have supported Yoritomo to be promoted to Shogun, a top of the Samurai Worriers for the first time in Japanese history. He was selected as one of the Time magazine’s most important people in the millennium together with Napoleon, Edison, Beethoven.

Kamakura is loved by everyone. It is often used for filming movies and TV dramas, and even for animation scene. Slam Dunk is one of the most popular anime series worldwide. You can see the same view that Hanamichi Sakuragi, a teenager of the story, sees: combination of a cute Enoden Train and the Ocean in front of Kamako-Mae Station is beautiful. Enoshima, often compared to Mont Saint-Michel, is a mysterious beautiful Island. Legend says an Angel (a heavenly maiden) flied down to the island and beat a bad Dragon. The Dragon turned out to be good, got married with the Angel, and they lived happily ever after.
*Even if you’re not Slam Dunk fan, this is a picturesque setting.

Hokokuji Temple, which was loved by Yasunari Kawabata, a Nobel Laureate in Literature, is one of the most popular temples in Kamakura. Standing in the bamboo forest makes you feel like you are in another world. In Jomyoji Temple, you will enjoy casual tea ceremony watching a beautiful Japanese garden in front of you. Sugimotodera is an old temple, and Nio guardians (Wisdom Kings) welcome you in the front gate. The stone step which was covered by green moss looks attractive.

Zen mindfulness, which is the base of various Japanese culture to be proud of, started here from Kamakira. Engakuji is one of the most prestigious Zen temples in Japan. On Saturdays, it is opened to beginners for Zen practice. Kenchoji Temple, rank No 1 of Rinzai School, also give you an opportunity to practice Zen in the evening of Fridays and Saturdays
*Need confirmation if Zen Practice is opened on the day

Japanese food culture took off from Zen Buddhism; Buddhist monks eat healthy vegetable base meal. Kamakura vegetables, which are served in many restaurants, are organic and tenderly grown. They are good!
For example, “Brown Rice with Enzyme”, which is specially cooked by Cosmo Kitchen (Macrobiotic and Healthy Food Restaurant), is nutritious and tasteful containing a lot of minerals. It makes you beautiful and healthy from inside of your body.
*Lunch price is not included in guide fee (around 2,000 JPY/ person depending on the restaurant)
*If Cosmo Kitchen is not open on the day, we will find other restaurant.

This plan only opens in June during Hydrangeas’ season.
You can best enjoy Kamakura during flower season, especially Hydrangeas in June. Since the flower temples are very crowded by tourists in its high season, I recommend you come to Kamakura at 7:30 AM in the morning. You will have an overwhelming experience. Hasedera Temple has Hydrangeas with a variety of colors. On the other hand, Meigetsuin Temple in Kita-Kamakura is famous for its all blue-colored Hydrangeas. In Jojuin Temple, Hydrangeas are beautiful against a background of the ocean.
*Best season for Hydrangeas will be middle to end of June, but blooming timing varies according to the weather of the season.

We offer you the guiding rate as below;

※ Booking is preferable 2 weeks or more in advance.

Please fill in the below box and send your requirement.

Payment is able to be settled by credit card (Paypal).
After your booking, we will send you an invoice, then after your payment by credit card, the booking would be completed.

If you have any questions or offer to book, please send a email. We welcome even tiny questions! Don’t hesitate, and see you in Japan!!